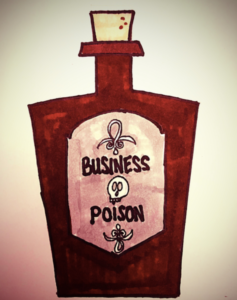 I was catching up with a friend of mine the other night and we covered a variety of topics during our conversation. We got to the topic of work and I asked how things were going. She mentioned that her new[ish] boss was “weird” but she was waiting for a friend who was planning on recruiting her to another organization. I asked her what “weird” meant. In this context, weird means not accessible, tone-deaf to the needs of anyone that manager didn’t hire, they are profoundly wishy-washy when it comes to approving time off of work, they definitely promote a culture of favorites, and are – in general – a zero-charisma communicator during interactions. Unfortunately, this isn’t the only time I have heard feedback about this manager in this vein.

There are a lot of opinions about why people leave jobs or become disengaged – bad managers, poor culture, the lack of opportunity for growth, etc.. The fact is that one big red flag is – generally – symptomatic of larger dilemmas. I have never worked in or with a company where they allowed terrible leadership to exist but, outside of that enormous problem, had a great culture. Terrible leadership exists because a weak culture allows for it. Oblivious and/or careless HR people and senior/mid-level leaders that aren’t actively involved in the business so they take a hand’s-off approach when issues are surfaced, significantly chip away at engagement and culture. Companies that keep people in the wrong positions so they don’t have to fill an open position hurt productivity, engagement, and experience for people inside the business which then hurts the external customer experience. All of these things are silently endorsed by executives who work within a silo of blissful ignorance to what is happening outside their scope of interest or outside the walls of their immediate space at headquarters. However…

A 2015 Gallup study surveying over 7,200 people concluded that approximately half of them had left a job at some point to escape their manager. And those were the lucky ones who were able to get away from a toxic manager and/or environment.

There are certain things that I have seen on a fairly consistent basis over the last few years that lead to employee disengagement by the choices their leader makes. Here are some of those things:

THEY ASSIGN SOMEONE A NONSENSE PROJECT: To appease someone who is seeking growth or challenge or to give people busy work, a manager assigns a project lacking any discernible meaning to the company’s or department’s strategy. And even worse, they then forget about it. This action is doubly annoying because on top of the employee’s wasted time and energy and the manager’s forgetfulness around the assignment it absolutely sends the message, “I don’t take you seriously.” or “What you do doesn’t matter.” – Either way you have probably killed your credibility as a leader and you’re people will likely not trust you to support their career journey following this type of empty assignment.

THEY EMBRACE TRANSACTIONAL LEADERSHIP: Though most organizations wish they were highly evolved and didn’t have any old-school ‘managers’ in their ranks, it’s a dangerous position to take. Those managers exist in most organization’s today and to not acknowledge their presence and act upon the damage they are likely inflict is allowing and endorsing toxic behaviors. These managers are – typically – yentas that support gossiping and counter-collaborative behavior(s) that allows for those they like to be in the spotlight and those they don’t to be ridiculed and often be the topic of public reproach.

THEY COMPETE WITH THEIR PEOPLE: Great leaders understand that their team drives the ultimate success. They encourage and celebrate when their people do amazing things, which in turn keeps most people motivated to continue to accomplish and deliver greatness. Terrible managers – instead –  see talented team members as threats. They worry that a “subordinate” will promote to their level or even replace them, and hold the crazy notion that this threatening to their status and perceived authority. This is the type of manager who assigns blame when metrics are soft or deadlines are missed. They also will take all the credit when their people deliver results without passing on thanks to the people who made it happen. They ignore the massive contributions of time, energy, ideas, and results, but pick at insignificant mistakes that have no impact on anything.

THEY ARE CONSTANTLY TESTING: It is normal to have a reasonable [but respectful] amount of testing in the early stages of a working relationship, but if that testing continues indefinitely – it will almost certainly lead to tension and disengagement. Terrible managers are those who criticize after the fact instead of coaching the moment an issue surfaces or an opportunity to improve is identified. These are people who say things like, “I wanted to see what you would say|do,” or “I knew that was going to go sideways but it was a lesson you needed to learn”, instead of supporting and guiding performance improvements. The fact is that great managers hire smart, ambitious, enthusiastic, talented individuals that complement the team and their objectives – the mere fact that anyone would need to consistently ‘test’ their people means they are probably a bully and a wildly awful manager overall.

THEY ARE ALL TALK: These are the managers who loudly proclaim, on a very consistent basis “I support you!!”, but when it’s time to stand up for their people against a ridiculous company process or executive declaration, they become sniveling cowards. They get fearful and sway, saying things like, “We can’t make exceptions to the policy. It’s what they want…” or “I don’t make the decisions – I just execute them!”. If you actually believe your primary role is to simply carry out and promote other people’s programs you are not a leader – plain and simple. You are a follower. Great leaders promote productivity and efficiency and ensure they have the right tools and resources for their team. If and when a policy or process directive impedes progress. Strong leaders address this challenge head on until they can support their team’s forward-movement by eliminating by bypassing it.

THEY KVETCH ABOUT STUFF – BUT AVOID DEALING WITH PEOPLE ISSUES: Great managers address issues when they first present and are small instead of waiting for them to explode into big deal, time consuming, annoying challenges. For instance, someone who is consistently late with deliverables. Soft and weak managers use hope as a strategy that the problem fixes itself at some point and profoundly lack the chutzpah to actually speak with the person who causing delays. They will frequently surface the issue to HR to address when [uh – if] they get around to it. However, weak-sauce managers will gossip and complain about this person’s problem to everyone else in the interim.

THEY “FORGET” TO SAY THANK YOU: Saying these two simple words, thank & you goes a long way. If you genuinely mean it, you can say “Thank you” one hundred times a day. If your people want you to stop thanking them they will let you know – but to date I don’t know of anyone who doesn’t want to hear those words.