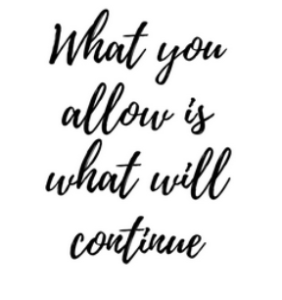 TEACHING PEOPLE HOW TO TREAT YOU

About three months ago I was consulting with a retail organization and the VP of Stores asked me to visit with him. He wasn’t a person I was directly working with on that project so it was a little unusual but he explained to me that they’d recently promoted two people to District Manager level roles who were having a difficult time assimilating into their new position with their teams. He asked me if I could spend two days with these two new DM’s to identify the issue(s) they were having and give them some guidance. “Yay!”, I said. I missed being in the field, with customers and the hard working people who drive the business. So happy to do it.

Once traveling with these emerging leaders it was clear that the major impediment they were having was similar in both cases – and it was that they were close to their Store Manager team. And why wouldn’t they be? They’d worked along side them for four and six years, respectively. The issue was that they needed to guide their people in how to treat them in their new role.

Nothing dramatic – they didn’t have to become monsters or stop any personal engagement to do this. Teaching people how to treat us – both personally and professionally – is a process that involves teaching them what is acceptable and unacceptable. It is knowing what we need and want and being able to communicate it effectively to others [and then being reciprocal with this expectation]. In my experience this is much easier in a professional environment than personal but it wasn’t something I was used to delivering guidance around to people I hadn’t worked with. Which made it that much more important and interesting for me. I explained this to both of the DM’s and told them I appreciated the opportunity to learn something new as well. We were in this together [and still are six weeks after the project has concluded].

WHAT TO EXPECT – THE CHALLENGES WE OFTEN FACE

Especially as new leaders or when taking on a new group of people we can struggle when it comes to managing accountability and calling people on broken promises.

Here’s the scoop…when you decide not to call someone on their broken promise(s) and ill-managed commitment(s), you’re inadvertently creating, and endorsing, at least part of the problem. The one thing you can expect – more of it. More broken promises. More turning up late either physically or through missed deadlines. More shortcuts that undermine the end result. More excuses and blame assignment. And more of the frustration and resentment, both by you and directed at you, that you’d probably much rather avoid.

If you’ve ever found yourself annoyed with someone who’s a perpetual slacker, late, or just unreliable – you will totally understand. It’s unfortunate, but absolutely true, that too many people value their promises poorly or manage their commitments cheaply. Others have a hard time holding people accountable. It’s easier to just let it go and ‘hope’ they’ll be better next time. Employing the strategy of hope is usually a great way to continue being disappointed or frustrated.

Working to fix a culture that is in need of change means that we must renew our commitment to manage every area of our professional life with integrity. When it comes to our promises [as leaders], it’s about honoring our word without exception and then refusing to tolerate anything less from anyone else that we interact with. I have worked in a lot of cultures with poor or no personal accountability, failing to hold people to account can set off a seemingly casual sequence of events that have wide-reaching and expensive implications – both in time and money. Allowing this culture doesn’t just undermine your own integrity, reputation, and influence, it impacts everyone around you and those you have aligned yourself with.

Objectively, if you have a lot of negative, unhealthy, broken people around you, it’s time for you to look at you. As difficult as that pill can be to swallow, we do ourselves a great disservice when we refuse to examine what we’re doing to attract these kinds of people into our personal or professional space. Applying that same analogy, when we are positive, enthusiastic, accountable, and ambitious we surround ourselves with that and find it a lot easier to place accountability around those things.

In a lot of cases – there are essentially two options: If are working in an organization or leading a team of people where promises are treated capriciously, accountability is non-existent and the honoring time commitments is terrible, either choose to be and lead the change you need to see in those around you or, if that feels totally hopeless to you, choose to start creating an exit strategy. Either way, own your choice to stay or go, but here’s the caveat – you cannot complain about your decision.

GUIDANCE AROUND CREATING A CULTURE OF RESPECT

The DM’s and I have had dozens of conversations about instilling accountability and creating a culture of respect through earning it and ensuring that their team understood their new role and what responsibility they now had to guide and support the professional growth of the people that they considered their friends. The “team” dynamic had been changed by them accepting their elevated role and they needed to rise to that occasion and explain this to their people. It was a different partnership today and one that was even more important and impactful than when they were peers. That needed to be communicated – often. Then ask these questions of yourself, frequently:

As a leader, if you don’t have healthy boundaries, if you don’t value your time at or outside of work, if you don’t take care of yourself, if you are loose with your promises, your people pick-up on this and they leverage it to their advantage and/or learn from it. You have to let people know that you value yourself and that if they come into your space causing lots of animus or seek to drain you, you will extract your support of them – quickly.

Decide What You Want Upfront: Over the years I’ve met dozens of people that have expressed frustration with what was delivered to them. So I ask what they expected and how they worked to create that expected environment? This question is usually posed to them rhetorically because most people – I have found – are never really sure what they wanted to begin with. They were winging it and “hoping” everything fell into place. So before you enter into a commitment, or even consider holding someone accountable, be sure you are really clear with yourself [and them] about what it is you want and how you define success for yourself, your team, or a project. How can others know what you want if you don’t? Or if you don’t make it crystal clear?

One of the biggest misconceptions most people have about relationships is that they believe others should just know how they want to be treated. However, in order for people in any kind of relationship to be cooperative they need to have access to the same ‘instruction manual’.  If you are struggling with communication it is absolutely reasonable to collect your colleagues to discuss the needs and wants of your professional relationship and those of the people you support.

What matters to you? Loyalty, integrity, reciprocity, collaboration, ambition, fearlessness. Whatever it is – discover it in other people. Attract and source like-minded people who share your values and vision. If you fool around with people who do not value what you value, I promise you – your life will be hell trying to work with them.

Be Absolutely Specific When Clarifying Expectations: Ambiguity is a catalyst for frustration and unmet expectations. In other words, we teach people how to treat us when we can identify a need and then express it in a clear and comprehensible way. If we employ passive-aggressive techniques, desperation, or even veiled threats, people do not learn how we want to be treated. All they hear is someone who is a coward or a bully, or both and definitely not good at what they do. Always make sure people are very clear about both what you expect to be done and when you expect it to be done.

Recognize and Reinforce Great Behaviors and Performance: If you operate with the mindset that keeping one’s promises shouldn’t be rewarded because it should just happen, you are missing an opportunity to reinforce behaviors that you highly value and appreciate. Publicly thank and acknowledge those who consistently deliver on their commitments with integrity, “show up”,  collaborate effectively, and generally do great things. Sure, we should all just do that anyway, but you will be highlighting for those who don’t that this is what you want to see more of and what earns recognition. And for those who don’t manage promises and commitments, take the time to coach them to competency and then hold them accountable. Most people want to do a good job – some just need extra support and skill growth to do it. If they still don’t do it, start the exit process. 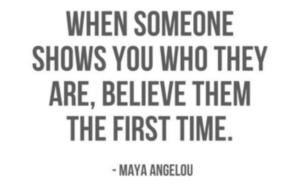 Have Realistic Expectations: You don’t teach people how to treat you in a day, or a week, or a month – especially when there has been a significant shift in the relationship; it will probably take a few months at a minimum to really get someone to treat you the way that you want to be treated and vice-versa. As you build trust and hold people accountable, people will realize how you are trying to shape the culture of your collective team experience. This process takes lots of practice and patience. And sometimes, people are too caught up in being rigid and defending their own reality to try to act differently. Or they are just troublemakers who aren’t going to play nicely no matter what. When you start clarifying what you will and won’t accept and show consistent congruency between your words and your behavior, there’s also a risk that some people won’t stick around. At that point, you need to ask yourself what’s in your best interest – a relationship at the cost of you and the health of the collective, or making room for the future relationships that are healthy, productive, and that bring out the best in the individuals and the team?